On the evening of October 2nd, 1918 Major Charles W. Whittlesey, commanding officer of the first Battalion Regiment., 77th, Division, led nearly 700 men under his command into the arrow Charlevaux Ravine deep in the Argonne Forest of northeastern France.

Units operating on his right and left flanks failed to keep up, leaving his unit out ahead of the main American line. That night, German troops slipped in behind his unit, breaking his liaison link to the rear and surrounding the American troops.

Five days later, the Major led 194 survivors out of the Ravine. Among the casualties was 23 year old John Henry Travers who was born in Malden, Massachusetts.

John’s Henry’s body was brought back to the United States in 1921 and hundreds marched in his honour during his funeral procession, as flags around his city of Malden were lowered to half mast.

John Henry Travers’ parents were John Travers and Margaret McGinty. Both of them were born in Druminin, one of the 12 townlands in the
Parish of Townawilly, County Donegal.

They emigrated to the USA and settled in Malden, Mass. They had seven children — Annie, Mary, Joseph, James, John Henry, Edward and Patrick.
John Sr.v was my grandfather Patrick Travers brother. A number of my relatives and I are compiling a History of our branch of the Travers.

I would be grateful for any information about the Travers family of Malden, Mass. 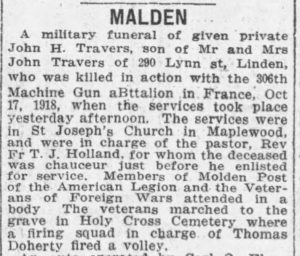 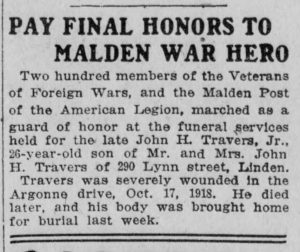